Creighton 100 is a great team shooting drill that also doubles as a fun, challenging conditioner. 100 made baskets in five minutes is the minimum. Obviously, the more skilled your team is the higher the goal should be. More times than not our goal is 120 mfg's for our varsity team. Teams will discover the importance of precision passing, fundamental layup skills and positive energy. We really like to finish with this competition the day before a game. See More 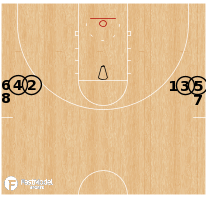 When Terry Stotts needs a big 3, he has Lillard Time!!! Damian Lillard sent Tuesday's game vs. OKC to overtime with this SLOB stagger set. It also happens to be the exact same set that won a huge playoff game vs. Houston last spring. See More 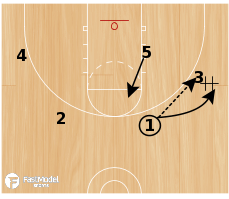 This FastDraw Post Up from HoopsU Insider is a 4-out, 1-in set that utilizes a handoff and basket cut to get a potential layup opportunity. It's a simple play to run that forces the defense to help from positions they may not be accustomed to helping from. You can also follow on Twitter @HoopsU. See More