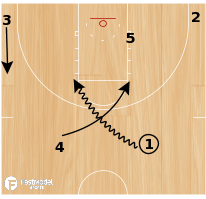 4 runs in front of 1, trying to get in the way of 1's defender. This works best if both are going hard. 1's first look is for penetration to the rim or kick out to 3 if defender helps. If 1 kicks out to 3. 4 continues down to screen for 5. They use screening action rules (one to ball one to basket). Here 5 curls to block and 4 pops back to the ball. 4 catches at top of key and has the option of passing to the strong side or the weakside (may also look high - low). Here 4 passes to the strong side and screens "down" for 2. On all "down" actions the wing has three choices: a) curl b) back cut c) post. Here 4 passes to the weakside and screens away. Once again we have the rules that cover screening: one to the ball and one to the basket. See More 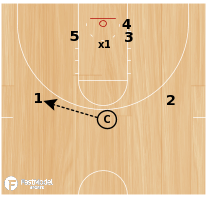 Drill starts with one defender in middle of paint. Two offensive flashers on one block, one on the other. Two passers out on top or wings. Coach begins drill by passing opposite of two flasher side. On pass, one player flashes to ball-side high post. Defender denies flash - bumps the cutter. On the skip across, defender drops to I. Cutter goes to opposite block. The opposite block player would then flash Same action to opposite side. Run for :30 per defender or so. See More 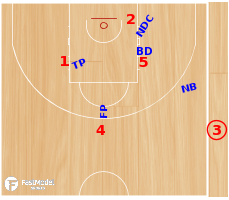 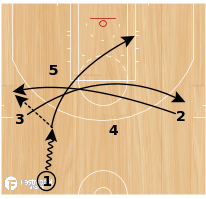 Today's FastDraw Play of the Day is "35 Power". Cross-Screen Downscreen for a post up. See More