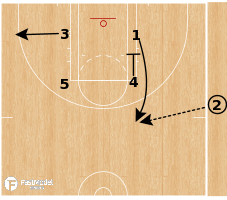 Watch the video below as Coach Tony Miller uses FastDraw, the #1 play diagramming program for basketball coaches, to share this set from WNBA’s Dallas Wings. 5 sets the ball screen for 1 as 4 clears the lane for the roll. 1 can create for herself or kick to shooters. A multiple option SLOB that will work for any team at any level! Send to FastDraw via the button above. Get FastDraw (new subscribers use code: SAVE10) Follow Coach Miller on Twitter View Coach Miller's Playbank page for more plays & drills More FastDraw content from Coach Miller: SSGs for Player Development & Team Offense SSGs for Ball Screen Offense Brad Stevens Playbook Check out the latest coaching content from FMS See More 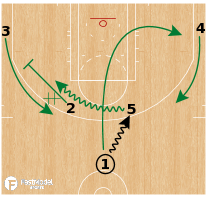 Celtics with a zoom action there for Tatum out of Horns. Based on your 3's skill set, he can shoot it like Tatum did or drive it. See More