Coach Wheeler was born and raised in Portland, Oregon. He got his coaching start at Cascade College where he was the student assistant for the women’s basketball program while also participating on the men’s JV basketball team. Coach Wheeler resides in Orlando, Florida with his wife Kiana. 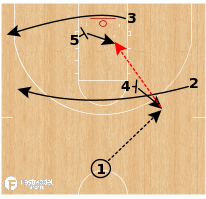 The Michigan Wolverines opened up the second half with this set to get the ball inside to their center, Hunter Dickinson. 4 sets the screen for 2 then pops out to receive the pass from 1. 5 sets a decoy screen for 3 and posts up at the rim to get the ball from 4. Follow more #FastModelMadness22 here See More 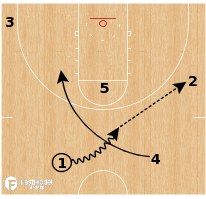 The Tennessee Volunteers ran this early in the 2nd half of their game against Michigan. This play uses multiple actions to set up the down screen for 3 on the weakside of the floor. In this instance the Volunteers were able to get the ball inside to 5 after x5 was forced to provide help on the screen. Follow more #FastModelMadness22 here See More 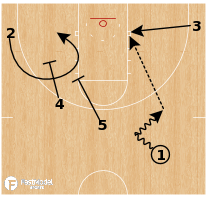 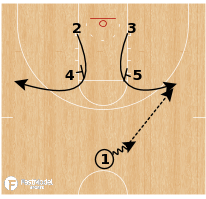 The Florida Gulf Coast Eagles women's team is known for their five-out offense and three-point shooting but this is a great quick-hitting play that they run to get a lob for their 5. The play starts with the guards curling around the posts at the elbows followed by a UCLA cut by the point guard and they 5 popping out to receive the pass from 3. 5 then reverses to 4 to setup the decoy action of 2 cutting off a screen from 1. 3 then sets the backscreen for 5 on the weakside for the lob. Video clip below. See More 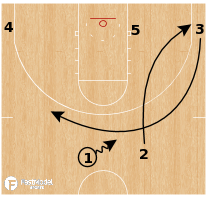 With Gonzaga struggling to score in the championship game against Baylor, the Bulldogs went to this ball screen set to get an open shot at the rim. The play starts out with a ghost screen from 3, 5 then follows for a PNR with 1. x3 did not want to help off of 3 because he is a shooter. This left x4 as the only player to help on 5 rolling to the basket. x4 met 5 late at the rim as 5 was able to easily get the finish. See More 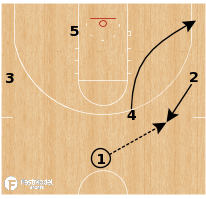 The Gonzaga Bulldogs ran this play in their Final Four game against UCLA to get Corey Kispert (3) the ball off a pindown screen for an open shot. The play starts with some decoy actions of 1 passing to 2 and 2 dribbling to the top as 3 cuts off the backscreen from 5. Once 5 screens, he turns around and rescreens for 3. 2 is now up top in position to make the pass to 3 for the shot. See More 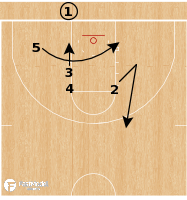 The Kansas Jayhawks are extremely good at running BLOB plays and they always have a few lob sets in their playbook. In this play 3 cuts down the lane to set a brush screen for 4 cutting off his back. 4 follows to screen for 3 who curls around the screen to the rim for the lob. See More 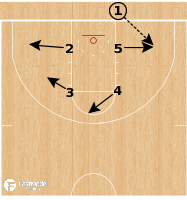 The Kansas Jayhawks commonly use this play with a simple entry to the 5. 1 follows the pass for the handoff looking for 2 cutting off the stagger screen or 5 rolling to the rim. Video clip below. See More 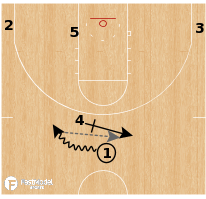 Texas Tech took advantage of the aggressive denial of the wing in this play to get a backdoor cut for a dunk. After 4 gets the ball off the pick and pop, 3 cuts to the wing looking to get a pass or handoff from 4. Once x3 starts to deny the pass, 3 cuts backdoor to receive the pass from 4. 5 cuts up the lane to set a fake screen to make x5 a little late on the help. Video clip below. See More 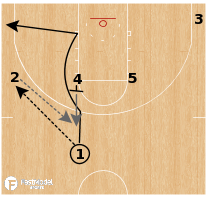 The UCLA Bruins ran this play late in their final four game against Gonzaga to get Jaime Jaquez a chance to attack the basket. After 1 makes the pass to 2 and the UCLA cut, 4 (Jaquez) pops out to receive the pass from 2. 5 slips the screen on the PNR with 4. 4 then turns the corner to attack the rim. Video clip below. See More 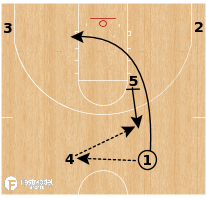 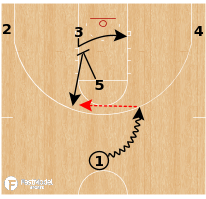 The Villanova Wildcats run this play to get a quick isolation for their 5-man for an open jumpshot or to take his defender one-on-one. As 1 dribbles to the right side of the floor 5 cuts to set a screen for 3. 3 rejects the screen and 5 cuts back up top to receive the pass from 1. Video clip below. See More 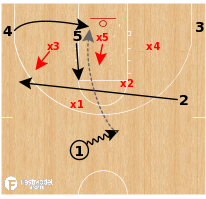 Villanova runs this simple zone action to free up the 4 for a lob cutting from the baseline. 2 cuts across the court to the opposite wing which occupies x3. 5 cuts up the lane line to occupy x5. 1 dribbles to the middle of the floor making sure to keep the matchup with x1, so he doesn't have a chance to rotate. This opens up 4 to take a run at the rim for a lob from 1. Video clip below. See More 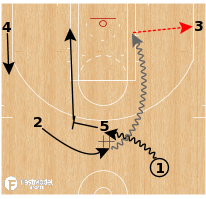 The Boston Celtics new head coach, Ime Udoka, ran this ATO to get Dennis Schroeder (2) an opportunity to use his quickness to attack the basket to create a play. Schroeder's speed comes in handy as he cuts off a screen and a dribble handoff to get the ball and attack the basket. Even though the Miami Heat switched the dribble handoff, Shroeder had too much momentum and was easily able to blow by the defender and create a shot for a three in the corner. Video clip below. See More 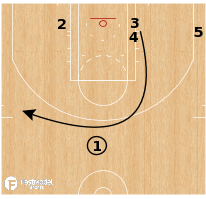 Luka Doncic attracts a lot of attention from the defense when he is coming off a ball screen. The Dallas Mavericks take advantage of this attention by setting consecutive ghost screens for Doncic (1). As Doncic dribbles off the second screen, 2 cuts off the baseline screen from 5 to get the open look in the corner for a three-point shot. Video clip below. See More