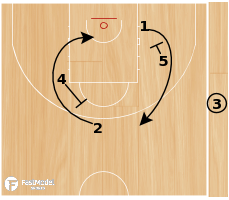 This is a fantastic action to run multiple scoring actions. See More 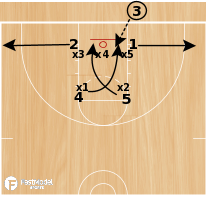 We use this BLOB vs a 2-3 zone defense. The key is the speed of the cuts. If the players sprint, it is very hard to guard See More 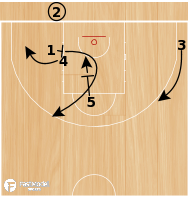 This is a great set to either just get the ball in or also have several options to score. See More

This is a great set to either just get the ball in or also have several options to score. See More 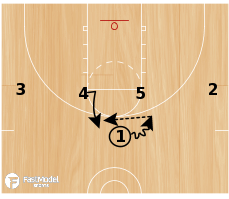 Up X can be run either way. In our diagram, 1 dribbles to the right lane line extended. 4 L cuts and steps out to receive the pass from 1. 1 cuts off 5's UCLA screen to the rim. 4 passes to 1 if open. If 1 is not open, the ball is passed to 5, the screener, right away. After 4 passes to 5, he fakes a screen away for 3. 1 steps out and sets a back pick for 2. 5 should pass to 2 if open for a layup. Usually 2 is not open. The ball should be passed immediately from 5 to 1. 2 continues his cut across the lane and back picks for 4, who cuts to the ball side block for a layup. As 2 sets the screen for 4, 5 screens down on X2. 2 then comes off 5's screen to the top of the key for a three point shot. 3 must cut away to occupy his weak side defender. 1 passes to 4 for the layup or 2 for the three point shot. See More 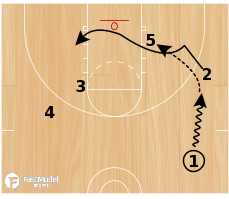 This is a quick action to get your big several looks in the post. See More 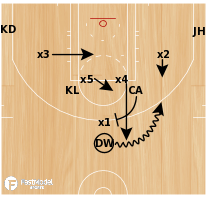 Melo sets a ballscreen for D. Williams at the top of the key. D. Williams hits Melo on the pop and then passes to Durant coming off the downscreen from Love. See More 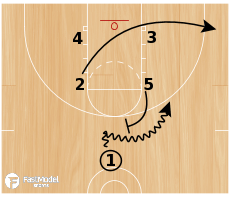 Today's FastDraw Play of the Day is a quick hitter from a box set. Use this to set up a lob or hit a strong finsher on a curl. See More 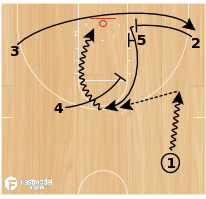 Florida Gulf Coast ran this set to get some easy looks at the rim early in the year in the Bahamas. See More 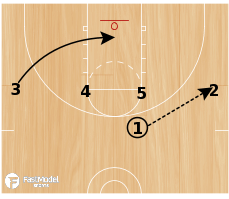 Lion is another of our 1-4 high plays. 1 can enter the ball to either wing, in this case the 2. 3 begins his cut across the lane. Throughout this play, 5 must work to get the ball so that his defender cannot help off of him. After 1's pass to 2, he screens down for the opposite post 4, who steps high to receive the return pass from 2. 3 continues through the lane and locates X2 as he prepares to set the back pick. 4 reverses the ball immediately to 1 who has broken out to the wing after holding his screen on X4. 3 screens for 2, who makes a flex cut to the block, looking for the layup. Again, depending on the game situation, we will take the layup if open unless we must have a three point shot. After 2 has cut through the lane, 5 and 4 set a staggered double screen for the screener, 3, who comes to the top of the key. 1 passes to 3 for the open three point shot. As with Charger, if x4 shows off the double screen, 4 should slip to the front of the rim. 2 should widen to the stripe if he does not receive the pass for a layup. See More 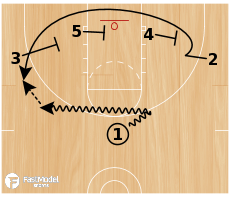 Use this great action at the end of a game for a quick shot. See More 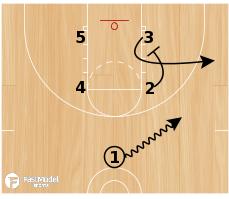 This quick hitter was submitted by Coach Luke Yaklich at Joliet West HS. "Clothesline" can be used in late game situations or if you simply need to jumpstart your offense. See More

Use this great action at the end of a game for a quick shot. See More 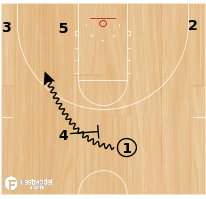 Today's FastDraw Play of the Day is a simple quick hitter run by Xavier in the 2012 NCAA Men''s Tournament. It uses a high ball screen to spread the floor and then freezes help defenders with the dribble and a hard ball fake. Good fakes lead to a back door opportunity. See More 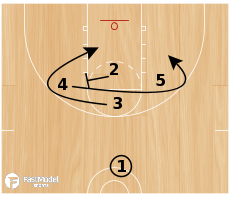 Today's FastDraw Play of the Day is a misdirection quick hitter designed to get the ball in the hands of your best player. See More