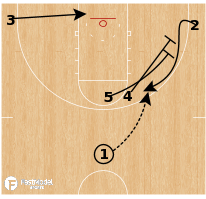 Here is a set play used late in the first half against Purdue. The Trojans deviate from their horns roll/replace and send the post players to the corner to set a staggered screen. They ended up drawing a foul on the play. See More 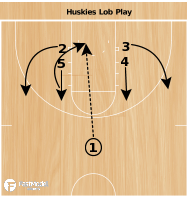 This was the opening play of last nights game between the Washington Huskies and Texas Longhorns which was played in Shanghai, China at the Mercedes Benz Arena. The game marked the beginning of the Shaka Smart era at Texas. Smart had previously coached from 2009-20015 at VCU compiling an overall record of 163-56 and included in that impressive record was a trip to the Final 4. Texas is hoping for big things under Smart not only this year, but in the years to come. Washington is coached by Lorenzo Romar entering his 14th season at the helm with a record of 270-159. The last few years have been down ones for the Huskies and Romar has a young team this year entering the PAC 12 season, but it promises to be exciting. This opening play started in a "Stack" low with the wings sprinting out to the wings and the posts men flashing high to the elbow. The play was designed hoping the 5 man's defender would overplay the flash enabling in this case Marquese Chriss to release to the ring for the lob pass from Andrew Andrews the Washington PG. The pass came up short, but it was an exciting way to start the game and a play which you can use to surprise your opponents at the start of a game! See More 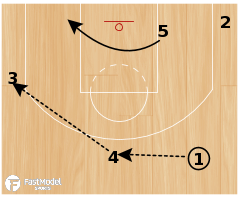 Instead of point guard passing to the wing, he passes to trailing big who reverses to opposite wing, on this reversal the first big man in the post follows the ball. After, both the point guard and big set a double stagger screen for the guard on opposite wing, coming to look for a shot. If no shot is there, then it flows into Horns and they have multiple options out of this, they can go into a double screen, a pindown into a dribble hand off and multiple flex options off of it. With this typically you will see the point guard coming up the floor holding up his bicep and flexing, hence the "Strong." See More 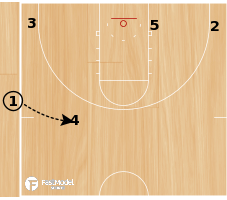 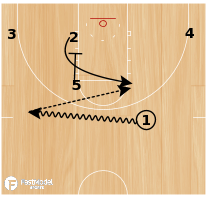 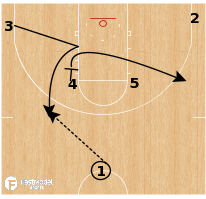 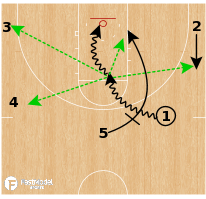 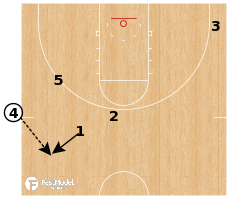