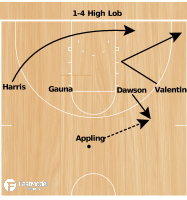 The Michigan State Spartans played the Kentucky Wildcats on Tueday night in the Champions Classic at the United Center in Chicago. This was an early season match-up of numbers 1 & 2 in the polls. Kentucky came in with a vaunted recruiting class and the two coach's are surely one day too be in the Hall of Fame. This play was run by Tom Izzo's Spartans when they needed a basket. It is a well designed play out of the 1-4 High Set. What makes this play so effective is the weak side cutting action eliminating any helpside defender. The key to this play is the screen from the 5 man on the PG's defender. Here the 5 man sets a perfect screen on x1 setting up the pass from 4 for 1 who puts in the lay-up. See More 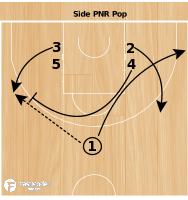