Pitch Cross provides a plethora of options that can be reads or calls depending on how your players progress. The basic look involves the 1 pitching the ball ahead to the 2 on the wing. The first look is always straight to the post for a quick bucket. If that is not available the 2 will then reverse the ball to the 4 who is trailing the play (usually due to taking the ball inbounds). After kicking the ball ahead the 1 shallow cuts and pops to receive the ball on the 2nd side wing. The 3 who ran the weak side wing settles at the block for a post up opportunity. If one does not present itself, the 3 then initiates cross screen down screen action by screening for the 5 who looks to post and receiving a down screen from the 4. The looks are to the post, to the shooter and if nothing presents itself whatever your motion principles are can kick in. For instance, if the ball hits the post and cutters dive and clear opposite ball reversal back to the 1 can initiate SPNR on the 3rd side. The same goes for a reversal to the 3 who doesn't have a shot. The 3 can then swing back to the 2 and again initiate SPNR action. See More

Great pressbreaker to use against a relentless faceguarding press. The key is for the 4 to be able to make good, quick decisions. Touchdown pass over the defense to 2 cutting up the court will be available early. 5 can stay and set an open court screen for 2, but I think it works better to send 5 as soon as action starts. See More

Same alignment as Homerun "Single" 2 will fake deep and come back to the ball this time. 3 will fake the double screen for 1 and then run deep. 5 and 1 run play as if they were running homerun single. 4 looks to throw the deep ball to 3. See More 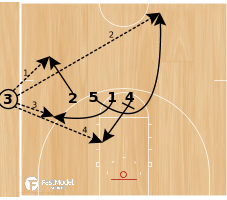 With teams deciding to press in the backcourt on sideline out of bounds plays, "Stack" gives a team a chance to get the ball inbounds and either set up their press offense, attack down the floor, or clear out and set up their halfcourt offense. For more, check out my website www.coachpeelbasketball.com, sign up for a membership, and get your first 30 days freee. See More

This play was drawn up by Head Coach Mark Turgeon of the University of Maryland in the final seconds of their victory over NC State. See More