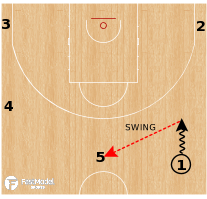 An excerpt from our new Five-Out Package Playbook In this sequence, the opening is the SWING to Player 5. The passer then gets into a MEET UP with Player 2. Player 5 takes the ball to the action with the dribble. In this diagram, Player 2 REJECTS the MEET UP and the action flows into either a pass-and-follow DRAG ball screen or a FLIP (dribble handoff). From there the offense is into EURO. Frames 5 and 6 show how we can SWING and get into a MEET UP on the second side. See More 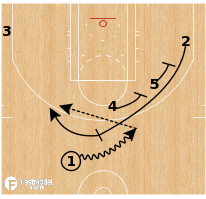 NBA Playoffs 2020-21: Atlanta Hawks set play. Stagger to Pick & Pop action to take advantage of the switch with K. Huerter. Check out the video clip below. *New customers use code SAVE10 for 10% OFF Draw/Scout* See More