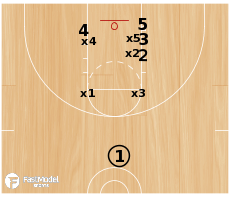 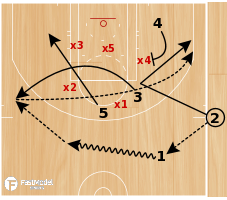 A sideline out of bounds play against zone defense with a 3 point shot opportunity. See More 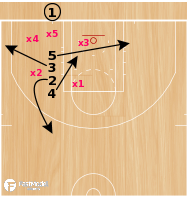 A baseline out of bounds play against zone defense. See More 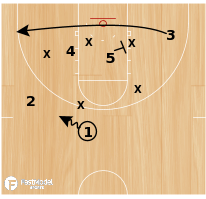 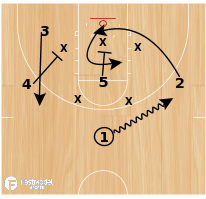 In this zone play from Michigan State, 1 dribbles to the right as 4 screens the bottom man in the zone and 5 screens the middle zone defender. 2 loops around 5's screen looking for a quick pass into the lane. If 2 gets the ball and the middle defender steps up, 2 passes off to 4 at the rim. If the outside zone defender stays underneath 4 on the initial screen, 2 can pass to 3 for an open shot. See More 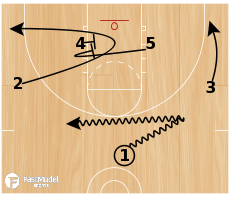 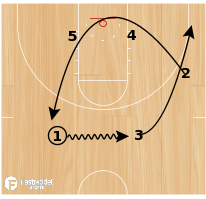 In this play from Bill Self, Kansas gets an open lob against a zone defense. 1 starts by dribbling to the right pushing 3 to the corner and sending 2 into the lane and back out to replace 1. Once 2 is on the perimeter, 1 passes back to 2 forcing the defense to turn and face the ball. With the attention off of 3 in the corner, he sneaks along the baseline as 5 and 4 screen up into the lane. 2 makes the lob pass to 3 for a dunk. See More 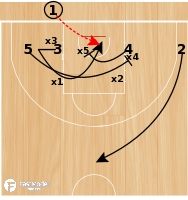 The USA Basketball team ran this in the 2015 FIBA U19 World Championship Quarterfinal game against Greece on 7/3/15. This BLOB set for a lob occurred late in the 3rd quarter against a 2-3 Zone Defense. See More 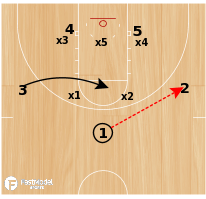 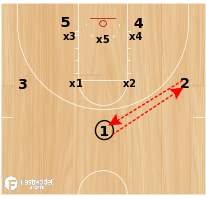 Here is a quick hitter for a lob against a 2-3 zone defense. See More 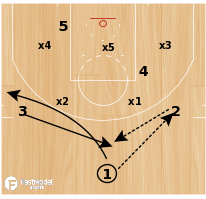 Designed to pull the middle man in the zone up and throw a lob behind the zone. See More 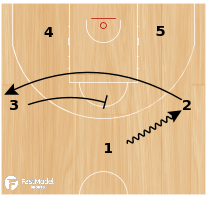 SHALLOW is a great quickhitting play to helps you attack Zone looks with a simple, but hard to guard action, giving you either a wide open look from 3 or an easy, high percentage paint touch. It was our gp-to play vs. 2-3 Zones last season. See More 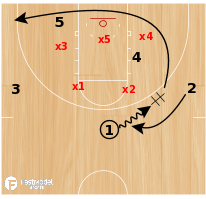 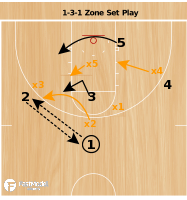 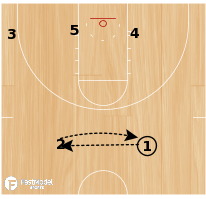 1 passes to 2 who passes back to 1 to get the defense moving. 5 moves up from the block to set a screen for 2 at the elbow. At the same time, 3 runs across the baseline to the opposite wing. 1 passes to 2 then moves to the left corner. 4 runs up to set a ball-screen for 2. 2 drives middle looking for a shot. If a shot isn't there, 2 passes to 5 replacing 4. 5 passes to 1 on the wing. 1 looks for a shot or to pass to 5 or 4 in the lane. See More